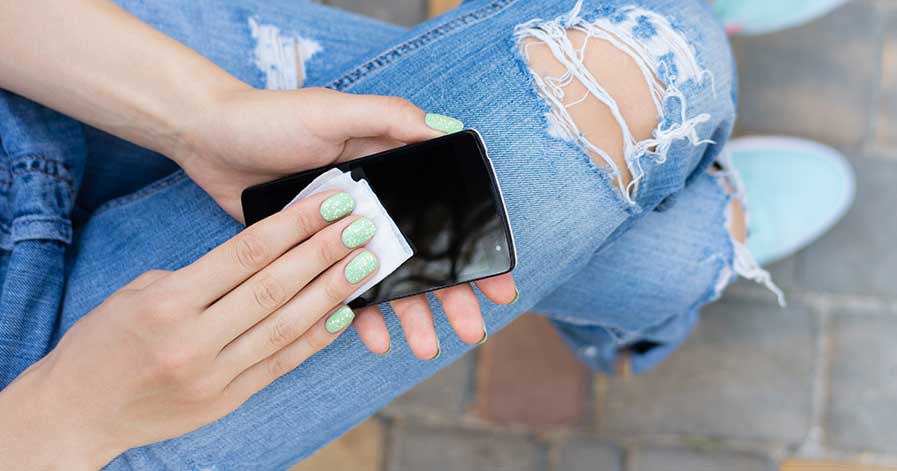 How to Clean Your Phone

Your trusty smartphone goes everywhere with you, which probably means it gets pretty dirty, too. Cleaning your phone is something that most of us will need to do at some point. You might find a build up of lint in the charger port, or in extreme cases, have to deal with a spill. If you’ve found yourself wanting to know how to clean you phone, you’ve come to the right place. In this article, we’ll go over six different tips how to clean your phone.

Remember: when cleaning your cell phone it’s a good idea to power it off, especially if you’re cleaning the charger port or headphone jack.

Lint in the Charger Port

This is probably going to be number one for most people looking for tips on how to clean their phone. With most of us keeping our phones in our pockets or at the bottom of handbags, there’s a good chance that dust and debris will get wedged in there. You’ll know you need to clean your charger port when the cable doesn’t seem to sit right, and maybe even comes loose when you move it.

So, how do you clean your charger port?

Cleaning Out the Headphone Jack

Similar to the charging port, headphone jacks can attract plenty of fluff and lint. Before you know it, your favorite headphones won’t seem to fit in the socket anymore! Although more people are moving over to Bluetooth headphones, it’s useful to know how to clean your phone’s headphone jack.

Chances are your phone has a high-quality camera, and you use it to capture all kinds of images. From nights out to food, family vacations, and holidays. But do photos you take on your phone look a bit blurry or soft around the edges? If so, then you probably need to clean your camera lens.

Cleaning a phone camera lens doesn’t require quite as much care as cleaning a real camera lens. Real DSLRs and digital cameras need gentle
care and some special equipment. Thankfully, your phone camera does not.

As your phone goes everywhere with you, chances are it’s harboring all kinds of dirt and bacteria. Giving your phone an occasional wipe down with some kind of antibacterial is a good way to make sure you’re not going to get anything nasty from your device.

Using a phone case is a great way to ensure your phone avoids any nasty shocks, and prevents damage to its expensive frame. However, phone cases are probably the biggest sources of built-up dirt and grime.

Premium phone cases, such as leather phone cases, will come with their own cleaning instructions, so make sure to follow the manufacturer’s recommendations.

However, in general, especially for plastic or silicon cases you can follow these guidelines.

Many top-end phones are sealed units, so there is nothing to see here for owners of iPhones, most Samsungs, and other flagship phone models. However, some models require the removal of a panel to access the battery or SIM tray.

If the panels are removable, chances are there’s some space for dirt to get in.

It’s as easy as that!

We hope these tips for cleaning your phone have been useful, and help you preserve your phone for a long time.

Would a Robot Vacuum be Helpful in Your Home? Find Out!

This robot vacuum guide will help you decide whether one would be helpful in your home and what to consider when making a purchase.
Continue Reading