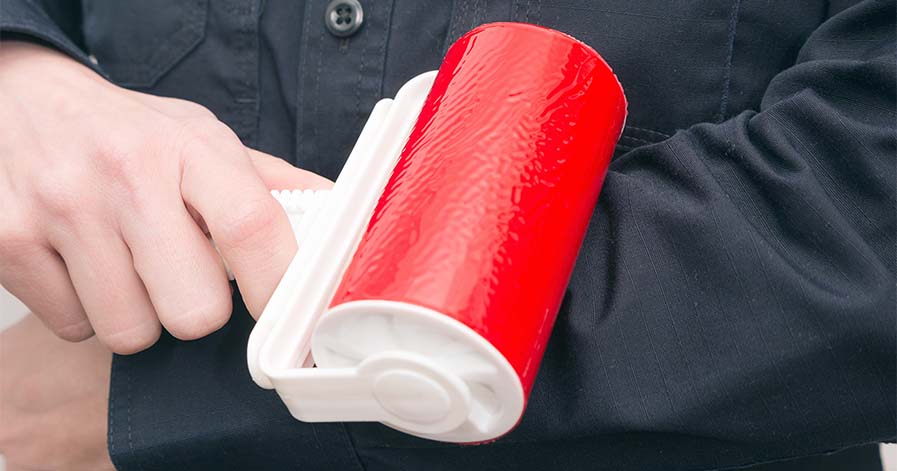 Want to know what a reusable lint roller is, what it does and how to clean it? Lint rollers were first invented by Nicholas McKay, Sr. in 1956, which was the first for-sale product that he created.

Dog and cat owners often purchase this product to remove pet hair from their soft furnishings, carpets and bedding. Lint rollers are now reusable, adding to their convenience. We’ll teach you how to clean a reusable lint roller, and we will also tech you about the pros and cons of one.

What Is a Reusable Lint Roller?

Lint rollers are handheld devices that are used to remove lint from clothing, furniture and any other items that attract lint. Lint rollers have adhesive attached to the roller, which collect the lint as you move it backwards and forwards over an item.

The roller barrel is made from material such as plastic or cardboard. In turn, the roller barrel is connected to a spindle that enables the rolling movement when pushed in a particular direction by holding the handle. A reusable lint roller is beneficial for the environment, as less waste ends up in landfills.

Why Do People Use Lint Rollers?

Lint was originally intended to describe short, unwanted textile fibers that attached to other materials. Now, lint is an encompassing word used to describe fluff and pet hair. People purchase these handy gadgets to protect their belongings.

Lint rollers can be used to remove dog and cat hair from sofas, cardigans, shirts, linen or any other soft items. It is particularly useful for removing lint from black clothing which easily attracts fluff and can quickly look unsightly.

Cardigans, shawls and ponchos tend to develop fluff over time, especially when placed in the washing machine without a bag for protection. When clothing is exposed to friction with constant rubbing movements, fluff can develop.

Sofas attract pet hair and fluff from clothing, which is easy to remove with a lint roller. Men frequently remove lint from suits and tailored trousers to give these a quick spruce up when they want to look their best.

Lint rollers contain a sticky adhesive material on the roller, which is what removes lint from your clothing or furniture. Debris needs to be regularly removed from your lint roller; otherwise, lint and fluff will no longer adhere to the surface. Reusable lint rollers are possible to clean to continue using for many years, which is a big positive for the environment.

Also, clean rollers help keep clothing, upholstery and linen looking good, so you will want to keep your roller in the best possible shape. Take the following steps to clean your lint roller, so that you can keep your home and wardrobe contents looking their best.

You’ll need masking tape and a kitchen cloth to get your reusable lint roller looking almost as good as new. Place some warm water in a small container and you are all ready to begin cleaning your roller.

Place your cloth in the warm water. Tap water is fine, as kettle-boiled water may be too hot. Remove your cloth and wring out the excess water. Damp without dripping is what will work best.

Lightly brush the damp cloth over the lint brush. Most of the bigger pieces of lint can be removed with this gentle dabbing motion. Avoid the temptation to wipe the roller roughly as this will damage the sticky surface, which needs to be preserved.

Rip approximately 3 inches off the masking tape and make a loop out of this length by sticking the one non-stick side to the other sticky side. Place your fingers inside the non-sticky loop of masking tape and begin dabbing firmly on the remaining lint on the reusable roller.

The purpose of using masking tape is to remove roller debris while reinforcing the stickiness of its surface. Make another masking tape loop if the first one is not enough to complete cleaning the roller’s surface.

Do not soak your lint roller in water. Soaking will damage its surface and the lint will not stick to the masking tape. As handy as the reusable lint roller is, it also has some drawbacks. Users claim though that the advantages far outweigh the disadvantages.

Most people love the variety of colors that reusable rollers come in, which range from pink to black, white, blue and other colors.

They also value how the sticky part of the roller is retractable, allowing for convenient storage without sticking to everything else. Reusable lint rollers are portable, so they are convenient to pack into a suitcase to take on vacation.

Environmentalists enjoy the fact that reusable lint rollers cause less pollution to their surroundings. Reusable rollers are typically just sticky enough to do the job for which they are intended, without shredding your clothes or upholstery, and they are easy to clean.

Reusable lint rollers are right up there with other useful inventions like Post-its. They successfully remove lint from clothing and upholstery, resulting in a neat look. Pet owners appreciate the value of a lint roller because they know that vacuuming or wiping down an item with a cloth is not nearly as effective at removing lint.

Lint rollers are easy to clean while also being environmentally friendly. Overall, the lint roller is a must-have home gadget to spruce up your home and wardrobe at any time.

Hand sanitizers are often used to supplement or replace washing your hands. Does hand sanitizer work? We go over it all here.
Continue Reading